Do You Have A Small Business That We Can Help You Start or Grow?

Bold Brew Co-Founders Jack Doheny and Jake Solomon (aka “Jack & Jake”) launched their cold brew coffee company as undergraduates at San Diego State University after bootstrapping $2,000 each to get the business started.

Over many months the self-taught coffee brewers honed their craft in the tiny kitchen in Solomon’s campus apartment, and then they hit the streets to find local retailers willing to stock their product.

Fast-forward three years, and Bold Brew has expanded its distribution from a few local independent stores to over 1,000 stores throughout the western United States including major retailers such as Target, Vons, Albertson’s, and Whole Foods.

For more information, check them out here.

Use of Capital Infusion Funds

The financing was used to expand the company’s product line and grow its distribution network. 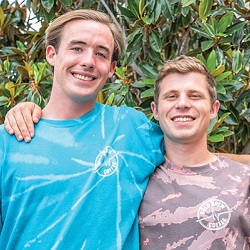 “Thanks to the Brink SBDC, we had the right investor pitch and positioning to make our seed round happen. Their expertise and mentoring had us well prepared to confidently and efficiently raise our first significant round of funding.”

Are You Looking to Start or Grow Your Small Business?

Let’s Get Started!
Go to Top